Nice Things to Know About Saraland – The Gateway to Progress 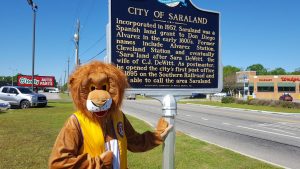 The area that was to become the present day Saraland was included in a Spanish land grant to Don Diago Alvarez. Hence, descendants of Alvarez were the ones to give the community its first name – Alvarez Station. Later land squatters moved into the area and were able, legally, in 1800 to begin purchasing property. In 1807 a land office was opened in St. Stephens to handle all land transactions. Some of the pioneer families who seized the opportunity to buy up sections were named Alvarez, Rice, Hartley, Moore, LaCoste, Williams, Tool and Cleveland. Ultimately, Alvarez Station was called Cleveland Station. The present name of the city is reported to have been given by C.J. DeWitt, a retired minister editor who moved south in 1890 for health reasons. He opened the first post office on the Southern Railroad in 1895. The Community is purported to be the namesake of his beloved wife, Sara.

Saraland was sparsely populated during the first part of the 20th century, until an industrial and population boom occurred in neighboring Mobile. Northward expansion of Mobile in the 1940’s and 1950’s brought about the incorporation of Saraland in 1957. At the time of incorporation, the city reported only 125 residents. By the 1960 U.S. Census, annexations had swelled the population to 4,595. In 1980, census figures cited 9,844 Saraland residents. Current census records report that as of 2000, Saraland’s population has grown to 12,288.