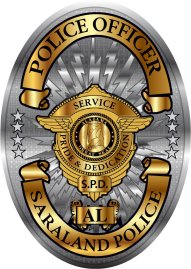 The Saraland Police Department is budgeted for forty-five sworn officers with an additional ten civilian employees. The department is broken down into multiple divisions to better meet the needs of the citizens.

The Narcotics Division is responsible for investigating all forms of drug crimes. Those crimes include narcotics possession, distribution, manufacturing and trafficking. Our narcotics investigators are specially trained to investigate and assist in prosecution of both state and federal narcotics cases.

The Special Operations Division is a specialized unit designed to fill multiple, ever changing duties. The special operations division is responsible for traffic control at special events. They are responsible for traffic control in high traffic portions of the city, as well as, aggressive patrol of areas with higher crime reporting than usual. The K-9 division operates under the special operations division and works closely with the narcotics division.

The SWAT team is a highly trained, thirteen member team, that specializes in rapid response to high threat situations. The SWAT team works closely with all the other divisions to ensure the safety of the community.
The Support Services Division is a group of both sworn officers and civilian employees that are responsible for the day to day operations of the police department.

Abatement of nuisances on public and private property – Code Investigation Report.  For questions contact the Saraland Public Safety Division at 251-307-1135 or email codeenforcement@saraland.org.